Carrie Preston posted a cute picture of Michael Emerson in her Instagram:

You can also locate this photo in the photo gallery.

Closer Weekly Magazine has an article about Michael Emerson and Carrie Preston. Here’s a teaser:

Around the time that Michael Emerson and Carrie Preston celebrated their 10th wedding anniversary in 2008, they landed at the perfect LA home that is as stylishly offbeat as their Emmy-winning TV performances.

“What appears to be a Mexican-Moroccan bungalow reveals itself to be a gracious desert home as you move through it toward the seclusion of the backyard,” Michael shares with ‘Closer.’ “Umm, yeah, what Michael said,” Carrie adds with a laugh.

And with their busy bicoastal life, the three-bedroom home was the perfect fit. “We aren’t in LA full time, so we wanted a place we could move right into without a lot of work,” says Michael, who also shares a Manhattan apartment with Carrie and their rescue Maltipoo, Chumley.

The biggest construction work they’ve done was rebuilding the chimney. Michael’s past experience as a scenery designer and illustrator is evident in the home’s deep colors and a decor that highlights a taste for the exotic.

“I’d say we have a folk-world, eclectic style that’s full of character and artistry,” Carrie shares, and Michael agrees. “We are attracted to warm-colored things from faraway lands — handicrafts and rugs, carved or painted furniture that’s more antique than modern.”

To read the full story on Michael and Carrie, pick up the new issue of ‘Closer Weekly,’ on newsstands now!

At the Premiere of Mandela: Long Walk to Freedom—NYC—Ziegfeld Theatre—11/ 25/2013

Additional photos are available at the Photo Gallery.

Larry King now has an interview show on the Internet on Ora.TV. He will be interviewing Michael Emerson this week (maybe Friday?). In anay event, I have the entire quote from Larry King’s website here for you to see. Come back here to find out when the interview is online.

What Would You Ask Michael Emerson?

Larry King will be welcoming Michael Emerson to our studio next week & we want your questions! 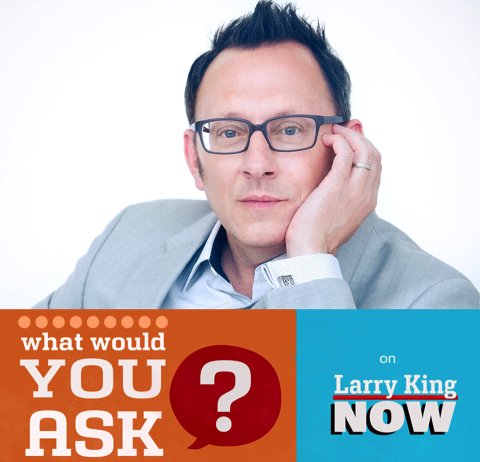 Larry King will be talking with Michael about hisCBS show, Person Of Interest – what do you want to know? Submit your questions in the form here for a chance to have your question asked on ‘Larry King Now‘

And be sure to sign up for show updates to find out if Larry King asks your question on this upcoming episode of ‘Larry King Now’ & don’t forget *NEW* episodes of “Larry King Now” are posted at 2PM ET online – but you can watch them after they premiere online anytime on Ora.TV & Hulu.

And if you want to know more about all the ways you can watch new episodes online, on your tablet or even TV – be sure to check out our “About” page for more info!

Chumley is as adorable as his people:

Larger and additional photos are available by clicking here.

Michael Emerson celebrated his 60th birthday with his wife and friends:

Larger version of this photo, as well as additional photos are available here.

There are always new photos added to the Michael Emerson Photo Gallery. Come check it out.

Larger and additional photos are available for viewing by clicking here.

M_Emerson_News
Sometimes our mirror site gets the scoop first